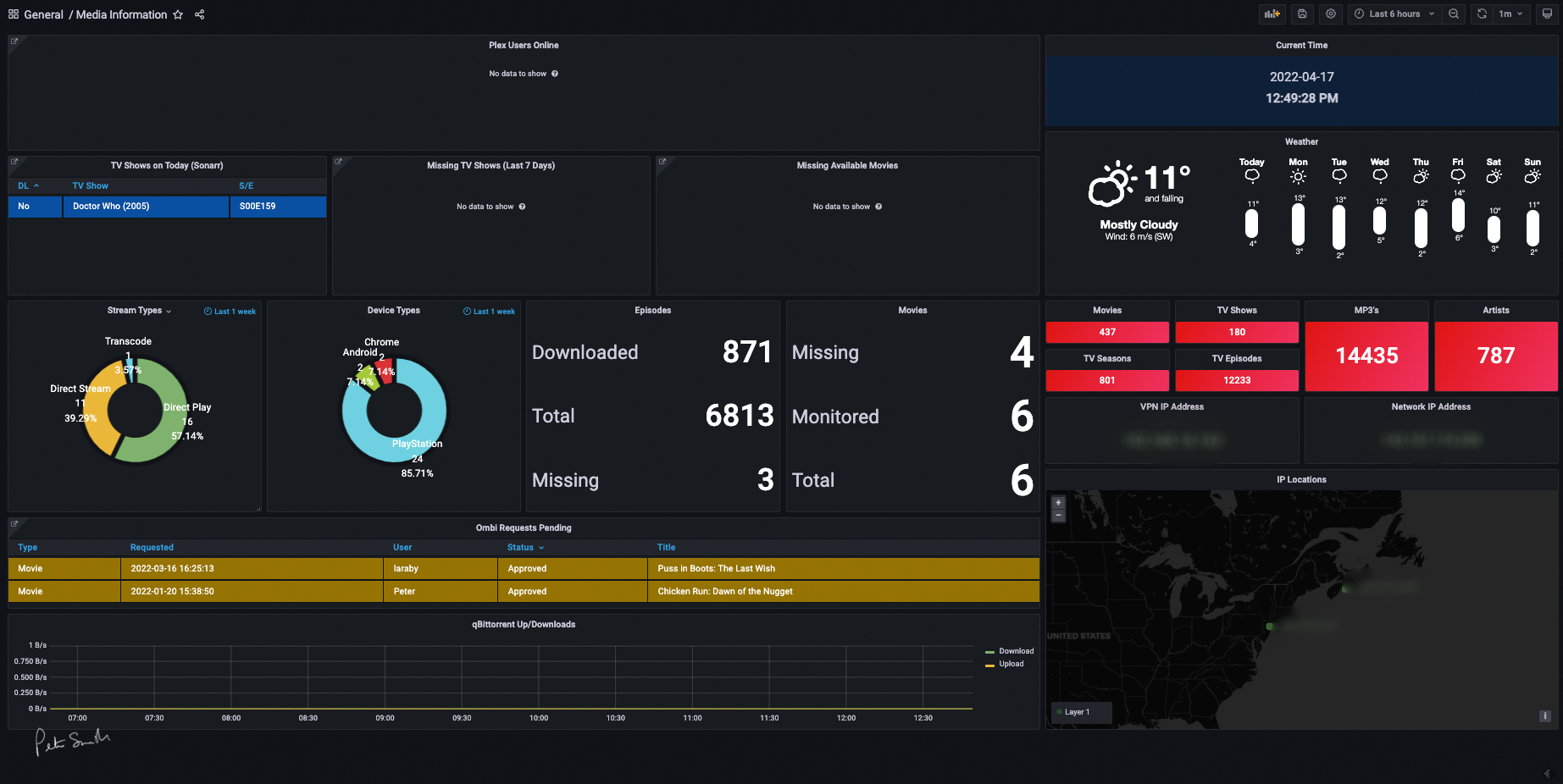 Like many tech people I have a “Home Lab”.  I think I should blog about it at some point too. Mine runs on two standalone versions of Proxmox running on an old laptop, and a Mac Mini. I plan to move both to one Intel NUC with better hardware in the very near future.  Perhaps I’ll blog about that as well at a later point.

One thing I wanted for all this, and some other things was some visualization/monitoring of both my proxmox instances, and resources, and also media stack, and a personal dashboard for a few random things, like weather, fitness, etc.

I kept googling and didn’t really know where to start, but eventually I came across this  https://grafana.com/blog/2019/10/29/how-to-set-up-this-next-level-personal-home-dashboard-in-your-kitchen/. While I don’t have many of the things listed here, or even the ability to get some, I did see the possibilities. So with that in mind I started playing.

On one of my proxmox boxes, I installed 2 virtual machines, one to run docker containers, and one to run grafana, prometheus (tho I’ve not actually used it to be honest), influxdb and telegraf. For the latter I used this guide. For the former I just used the option in the base Ubuntu 20.04 install.

My docker install I’ll explain as I go through my data sources as I explain my panels.

I will, eventually, post all the dashboard, and code I wrote to github or similar.  But it needs a clean up first to extract personal info from the code bases.  Also, none of these products live outside my home network, and are not available publicly, so I really didn’t make much effort in securing things.  A bad practice I know.

But before I do any code explanations or anything else.  I just wanted to first demo the actual dashboards.

The first, and simplest is proxmox monitoring.  It monitors RAM, CPU Usage, and other metrics from my Proxmox boxes.  Will delve into it in part X!

The second is my “personal” dashboard.  It has weather data, fitness data from my Garmin & Strava accounts.

The last monitors my Plex server and associated tools such as Ombi, Radarr, Sonarr, Lidarr, Prowlarr and qBitorrent.  That whole stack will be the subject of a separate post sometime in the future.  Included on this one I also monitor my VPN and Network IP addresses.  And where they are located geographically.  More for “fun” than anything.

Stay tuned for more posts on all this!