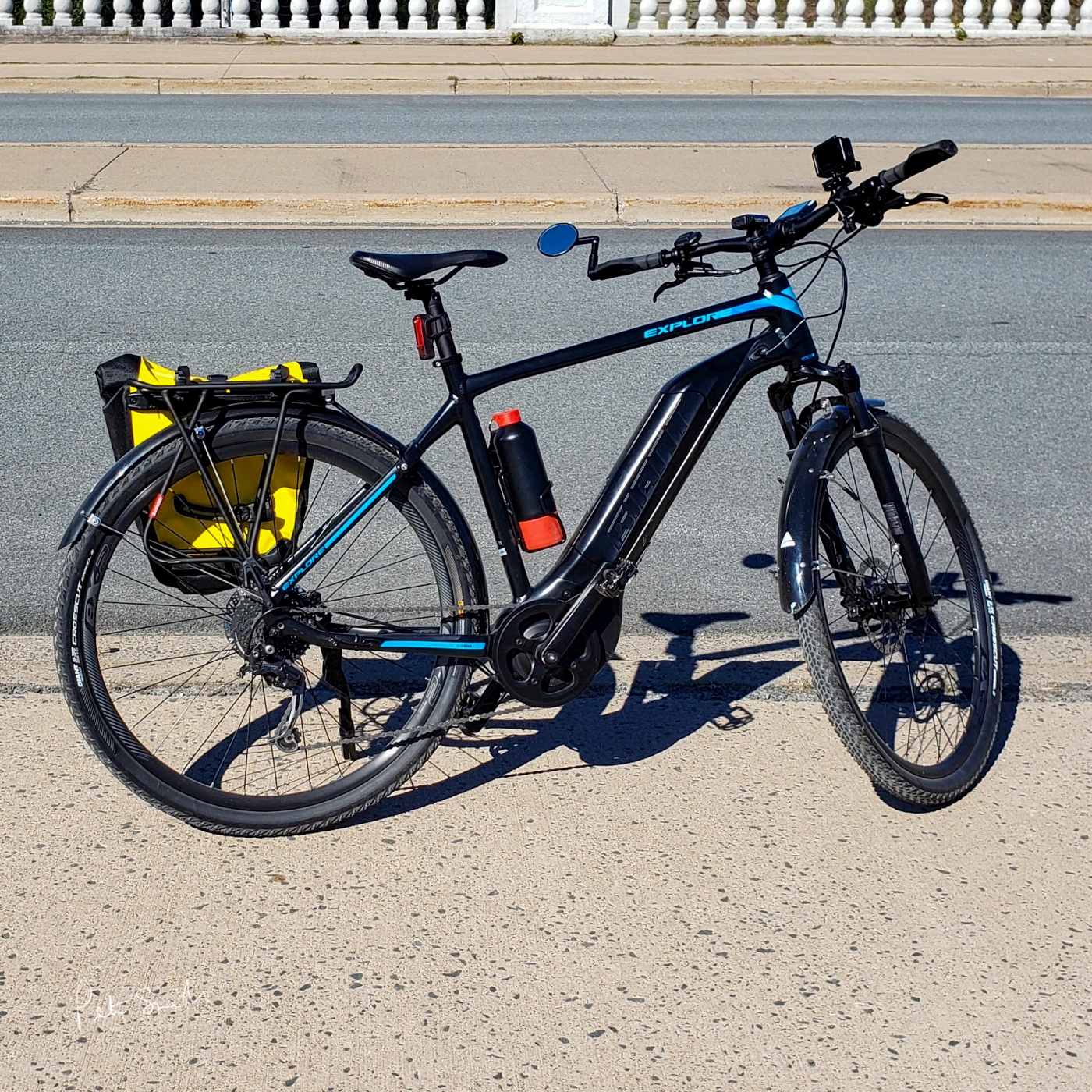 Its time for my e-bike review.  Specifically, my Giant Explore E+4 GTS.

I had always enjoyed riding bike, but after moving to a city from my rural roots (and routes), I was very nervous about riding in traffic.  Lack of motivation, interest, and general overall life business made excuses till I really had forgotten it much at all.

After years of sitting in front of a computer, my overall fitness had, of course, declined.  Not that I was ever elite at anything, but I used to be able to at least walk and run quite a bit.

I had started to gain interest in getting fitter, especially once my waistline hit 40, but I still didn’t do much about it.  I had tried biking back in 2014, but my old man knees and lack of fitness couldn’t handle my steep hill neighbourhood, and I soon gave up again.

Finally, one day in August 2019, after needing to run up two flights to get to the bathroom in a hurry, and consequently gasping for air, I finally said “enough”

So now I was motivated to get back in a shape other than round, but how? Secondary to this post, I did join a HIIT gym (OrangeTheory), doing classes 2 times a week, which I may write about later as well, but it and the research I did are off topic for now.

I really felt like cycling (biking?) was something that would be good for me, versus running especially as my knees tended to have issues and didn’t think the impact would help.

But I also knew there was no way I could ride up the hills in my neighbourhood (or most of the city) in my round, nearing 250lbs shape.

E-bikes were something I had seen online, and I began researching them.  I have to admit I was skeptical they could do the job, and I’ll come back to that, but starting to reseach led me down so many avenues things to consider, it can be, and was, a little overwhelming.

I did what I try to do with new things, like my camera, focus (pardon the pun) on one setting/feature at a time.

First off, there are multiple classes of e-bikes, and each has their own considerations.

This class of e-bike only assists the rider by adding more power to what the user generates. It is not self propelled.  And depending on jurisdiction, is typically limited in assistance up to 25kph-32kph. This doesn’t mean you can’t go faster, but the motor will not be assisting you once you do.

FWIW, this is the type of bike I own

This class of e-bike has a thumb or twist throttle similar to a motorcycle, pedaling is still available, but you don’t need to pedal to get a boost.  I did consider this type, quite a bit really, but after reading many articles on the gray area of bike vs motor vehicle, and licensing and insurance regulations around them, ultimately considered it a risky proposition which could get banned or regulated.  If you follow news stories, these are the type of bike that has been under scrutiny and subject to problems in British Columbia currently.

This class, which seems uncommon, at least here, is similar to a class one, but allow for higher speeds, and are in most locations subject to motor vehicle regulations for licensing and insurance.

I am not a professional reviewer, and wont try to give all the pros and cons of each type, but will give basics, and tell why I chose what I did.

In this model, the motor is built into the front wheel.  This is a simple design, and often a cheaper e-bike, but when researching, and just thinking about it, I realized that

Basically the motor is in the rear wheel.  This is a, in my opionion, a much better option, but I was concerned with a couple items. One being any damage to the wheel might mean replacing the whole motor, and the second being less torque than option 3.

After riding my bike for a year, the torque thing for climbing hills, may have played more into my decision more than was necessary, but it was on my mind at the time

I didn’t start this as a guide to buying an e-bike, but other avenues of research I did consider was battery wattage, engine wattage and torque.

You want to be sure you can ride without having to recharge too often, you want an engine that has enough wattage and torque to handle your weight and terrain.

I’m no expert on these features by any means, but they are considerations and if you understand the math, they may factor into your decision. Mine really came down to a test drive.

Not going to lie here, my ultimate decision came down to three things.

Ultimately, there were only a couple brands that I ended up considering, Trek, Giant, and Cannondale. Ultimately, either was likely a good choice, but Trek and Cannondale pricing was more than I had budgeted for.  That may have not been so much an issue if I hadn’t been happy with my Giant experience, but I was, so that’s a moot point.

After all this research, and reading reviews and opinions, I have to admit I was still skeptical an e-bike could do what I needed, that being get me up the 8-10% grade of my local hill without giving me a heart attack in the process.

I decided to visit my local Giant dealership, and talk the fine people there at which point they offered me a test drive up Citadel Hill in Halifax.  Not quite as steep as my hill, but close enough for a feel

Once on the test model, I was blown away. They set me up in assist level 3 of 5 (250% assist) – and I blew up Citadel hill like it was nothing.  Obviously higher assist levels use more battery, but I can’t imagine what 5 feels like (I’ve still not used mine past 3) – After a long bike ride, when really tired I can imagine it feels like wings.

My decision was made, but the model I wanted/could afford wasn’t in stock.  So I waited, and I got it a few weeks later.

After all that, I guess we get to the meat of the thing! The review! I’ll start with:

There aren’t many, but there are some, I’ll list what I’ve found in my year of riding

I’m sure I’ve missed things, but feel free to ask in the comments.  Happy to answer anything I have answers for!

Posted in Cycling by Peter Smith